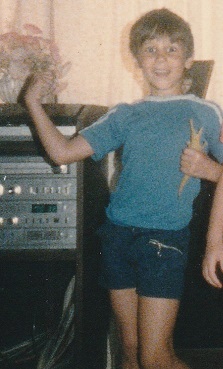 I am Chuck Morgue, but you may also know me as Charles Metcalf Jr. I am a writer, publisher, musician, and artist. I am also a politician, strategist, activist, and all around political interloper.

I currently serve as the Louisiana Democratic State Central Committee representative for District 33(B), which covers a portion of west Calcasieu Parish, in southwest Louisiana.

I am a staunch supporter of creativity and innovation. A lifelong geek who grew up on cheesy horror movies, Stephen King novels and bright adventurous comic books. I love science and art, cooking and listening to Delta blues music on vinyl. A proud bohemian nerd who wears his dorky heart on his sleeve.

I am a divorced father of four who has spent his entire life either in very low middle class or poverty. I have seen the worst parts of society, as well as the best, from a front row seat of struggle and worry. I was born in Ferriday, Louisiana, in 1979 to working class conservative parents, who raised me in several towns in Louisiana and Mississippi as they worked to find their footing in the economically challenged South of the 1980s and early 90s.

I grew up overwhelmingly interested in the arts. Drawing, painting, writing, and playing music have long been more than mere hobbies to me. They are vital to my very well being. My personal moral compass was built by a combination of lessons learned from my parents, Mr. Rogers’ Neighborhood, and X-Men comic books, and these lessons inform my humanitarian beliefs to this day. After the turn of the century, in my early adulthood, I began taking my creativity more seriously. I played in various bands, and began writing fiction more. Under the pseudonym Chuck Morgue I have written and released novels (through my own independent publishing imprint Nautilhaus) inspired by the horror films and books I enjoyed so much as a kid.

I married young, like many tend to do, and jumped from job to job, hustling paycheck to paycheck, just to make ends meet. When I divorced in 2015, I became a single dad to four incredible kids, including a son on the autism spectrum. I struggled to make sense of the change in dynamics, and found it to be a very enlightening challenge. My children have since flourished in school, and I couldn’t be more proud of them. My kids are my entire world. Which is why I decided to get more involved in politics and activism.

The sociopolitical landscape fills me equally with excitement and acute dread. The real world has always had this effect on me. My imagination is my refuge, creativity my outlet.

Whether I am writing novels or short stories, composing songs, or painting, I am putting my heart out there. Sometimes the end result is discomforting. Sometimes it is exhausting. And sometimes, it makes me proud.

I hope you find something to enjoy in what I have to offer the world. Or perhaps something to despise. Or to pity. As long as you have a real reaction to what I create, then my art has served its purpose.